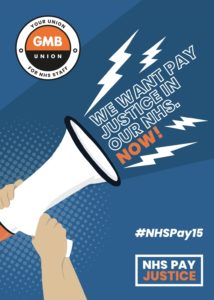 GMB, the union for NHS workers, has slammed the Government after its evidence to the NHS Pay Review Body suggested that NHS staff could face either a pay rise of just 1 per cent – or more cuts.

The Department for Health and Social Care submission is six weeks late, which has delayed a planned decision on NHS pay which should have been implemented in April.

In the evidence, the Department stated (visit here) that ‘the Government assumed a headline pay award of 1% for NHS staff. Anything higher would require re-prioritisation’ of resources.